Can a supervisor hug an employee? Court case provides boundaries

The U.S. Court of Appeals for the Ninth Circuit recently ruled that a sexual harassment lawsuit could go before a jury. The plaintiff’s primary complaint? Unwelcome hugs.

The female plaintiff in this case (Zetwick v. County of Yolo) alleged that she was forced to endure a sexually hostile work environment, having been hugged by her male boss at least 125 times over the course of 13 years, and kissed at least once. Male employees received handshakes, but did not receive regular hugs.

The employee complained to supervisors about the hugs, but her objections were not investigated or resolved.

In court, the employer argued that the hugs were not “severe or pervasive enough to establish a hostile work environment”; rather, they were “merely innocuous, socially acceptable conduct.”

A district court ruled that hugs and kisses on the cheek are “common workplace behavior,” and dismissed the case without a full trial.

On appeal, however, the U.S. Court of Appeals for the Ninth Circuit said that the lower court had erred on a few fronts:

Overall, said the Ninth Circuit, the lower court tossed the case prematurely, since it had not properly considered the totality of the circumstances, including the “kind, number, frequency, and persistence” of the hugs. A reasonable juror could, according to the appeals court, find that the supervisor’s behavior left the realm of “ordinary workplace socializing” and entered into the zone of abusive conduct.

The Ninth Circuit, in late February, sent the case back to the lower court to allow a jury to decide whether sexual harassment occurred.

For a claim of sexual harassment based on hostile work environment to be actionable, the environment must be one that a reasonable person would find hostile or abusive, and one that the victim did, in fact, find to be so.

Considerations of how “a reasonable person” would feel and whether conduct is “severe or pervasive enough” can seem about as clear as mud to employers, and these contemplations do leave a certain measure of subjectivity. But employers can still help themselves by considering:

Still, as the Ninth Circuit pointed out in this case, these considerations can’t be made in a vacuum; they must be made with the “totality of circumstances” in mind.

When considering whether a situation may involve sexual harassment, employers may want to consider the perspective of a “reasonable person” who is a bit on the sensitive side. Remember, if a case comes to a jury trial (as this one will), the jury may be more likely to identify with the employee than the employer.

Employers that want to err on the side of caution will focus their efforts on stopping unwelcome behaviors long before the question arises of whether the conduct is severe or pervasive enough to create a hostile work environment.

Keep in mind that the employee in this case did report her concerns, but they were not addressed. Had the complaint been handled appropriately, the employer may have never found itself testing the severity and pervasiveness of hugs in the first place.

Katie Loehrke is a certified Professional in Human Resources and an editor with J. J. Keller & Associates, a nationally recognized compliance resource firm. The company offers a diverse line of products and services to address the broad range of responsibilities held by HR and corporate professionals. Loehrke specializes in employment law topics such as discrimination, privacy and social media, and affirmative action. She is the editor of J. J. Keller’s Employment Law Today newsletter and its Essentials of Employment Law manual. For more information, visit www.jjkeller.com/hr. 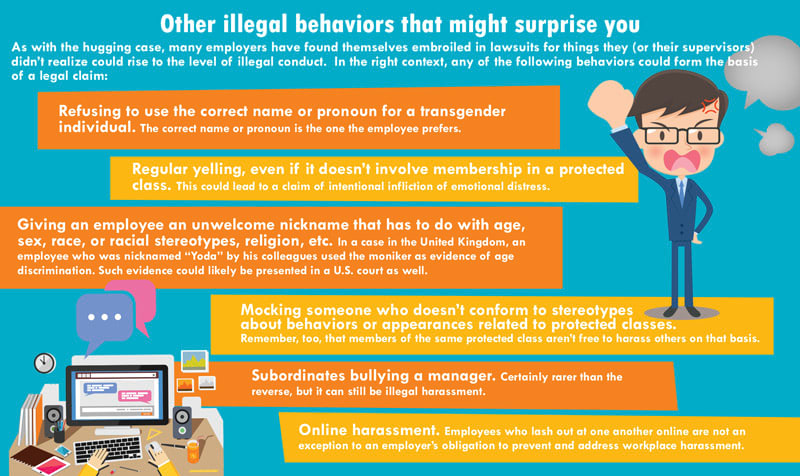