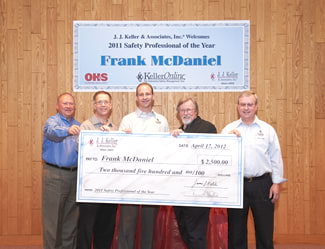 2011 Safety Professional of the Year

KellerOnline® and OH&S Magazine honored Frank McDaniel, Director of Safety for Helix Electric, as the 2011 Safety Professional of the Year (SPOTY) on April 17, 2012 in a ceremony held at J. J. Keller & Associates, Inc. in Neenah, Wisconsin. The event marked the 10th annual presentation of one of the most sought after awards in the industry, recognizing individuals for creating and implementing unique safety programs within their organizations.

During the presentation ceremony, McDaniel spoke about his philosophy of behavior-based safety, and how this approach has helped San Diego-based Helix Electric become one of the safest, most successful electrical contractors in the industry. His commitment to linking safety, quality, and productivity together is reflected in a significant improvement in Helix’s safety statistics. Since 2005, Helix’s total OSHA-recordable injury rate has dropped approximately 80 percent, and its lost-time rate has seen a 90 percent reduction.

Tuskahoma Thompson, HSE Director of the Fluor Corporation, earned a second-place SPOTY award, which included $500 in cash, a plaque, certificate, and a one-year subscription to KellerOnline. Third place winner Laina VanBuskirk, Safety Director for Golden Hawk Transportation, received a plaque, certificate, and one-year subscription to KellerOnline, along with a $50 cash award.