Since 2015, contractors covered by Executive Order 13658 have been required to pay employees the federal contractor minimum wage. The rate is $10.95 per hour for 2021.

This rate is adjusted annually for inflation and increases to $11.25 per hour on January 1, 2022.

Employers covered by the executive order need to display updated posters showing the new rate for 2022.

This new rate takes effect on January 30, 2022. It only applies to contracts entered into or renewed after that date.

When a business enters into a federal contract that falls under the new executive order, the contractor will need to display a poster showing the $15 per hour rate.

Federal contractors will need to comply with the executive order that relates to their contract. Older contracts will remain subject to the minimum wage requirements of Executive Order 13658, while newer ones will fall under Executive Order 14026.

Employers should post the federal contractor minimum wage poster called for in their contract: 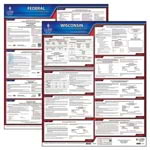 Get the information and products you need to stay on top of poster changes and comply with regs.