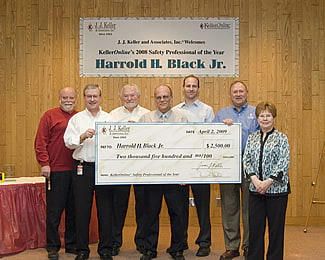 2008 KellerOnline® Safety Professional of the Year

J. J. Keller & Associates, Inc. honored Harrold (Jay) Black, Environmental, Health and Safety Manager for Trex Company, as the 2008 KellerOnline Safety Professional of the Year (SPOTY) on April 2, 2009 in a ceremony held at the J. J. Keller headquarters. The annual SPOTY Award, initiated in 2002, is sponsored by KellerOnline, the most widely used safety management tool on the web. The Award program recognizes three individuals each year for their accomplishments in the safety industry and winners are chosen from a field of more than 100 applicants.

Black received first place for having rebuilt a defunct safety program from the ground up and reducing reportable injuries by nearly 65% and near miss incidents by nearly 80% within his first year on the job. In the year prior to Black taking over the safety role, his plant had 14 recordable injuries. The problems he had to deal with head on included a high reportable injury rate, higher than normal incident rate, and negative employee attitudes.

In addition to reducing reportable injuries and near miss incidents, the efforts taken at Trex have resulted in a premium drop of several hundred thousand dollars for the company’s workers’ compensation renewal premiums. He credits his ability to make some rapid changes to KellerOnline and the ease with which he can find the information he needs to take action. His subscription to the service has saved him a significant amount of time in research because he can easily access the regulations, proposed rules, letters of interpretation, compliance directives, and other reference materials that help him make decisions, write policies, and conduct training.

Harrold (Jay) Black, 2008 KellerOnline Safety Professional of the Year Award WinnerAlthough he clearly led the way for the success of the safety program at Trex, Black says that none of it would be possible without his safety committee and the support of the entire plant – from the CEO all the way down to the employee on the floor. He has put a significant focus on empowering people and putting them in control, which has instilled ownership and commitment for safety in Trex employees.

Steve Knight, plant manager for the Fernley, Nevada location, said, “Jay’s insight and passion for safety have turned things around for our company safety culture. He is extremely dedicated to workplace safety through continuous improvement and employee engagement. We are extremely proud of Jay and what he’s done to make our company a safer place to work.”

Black received a $2,500 cash award during the special ceremony, along with a plaque, certificate, and one year’s use of KellerOnline for himself and his coworkers.

Tim Palmer, Director of Environmental Health and Safety for TIC Holdings, Inc., received second place. He received a $500 cash award (which he donated to his local United Way chapter), a plaque, certificate, and a one-year subscription to KellerOnline.

Jason Neatrour, Transportation Manager for Liquid Environmental Solutions, was awarded third place. He received a $50 cash award, a plaque, certificate, and a one-year subscription to KellerOnline.