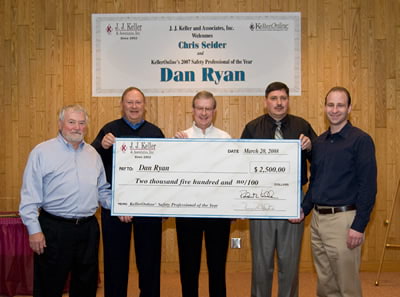 2007 Safety Professional of the Year

J. J. Keller & Associates, Inc. honored Dan Ryan, Vice President of Environmental Health, Safety and Security at Veolia Water North America, as the 2007 KellerOnline® Safety Professional of the Year (SPOTY) held at the J. J. Keller headquarters on March 20, 2008. The annual SPOTY Award, initiated in 2002, is sponsored by KellerOnline, the most widely used safety management tool on the web. The Award program recognizes three individuals each year for their accomplishments in the safety industry and winners are chosen from a field of more than 100 applicants.

Ryan received first place for creating a safety culture that is unsurpassed in the water and wastewater industry. Veolia Water North America posted their best employee safety statistics for a calendar year in 2006 and in 2007 had an even better year with a recordable incidence rate of 3.8 and a lost time incidence rate of 0.9 compared to the Bureau of Labor Statistics (BLS) average for private –industry water, wastewater and other systems of 5.2 and 1.6 respectively, proving that their outstanding results were due to a true culture change versus by chance.

Ryan said that the arrival of President and CEO Joseph Burgess in 2005 brought a renewed focus on safety and his leadership has been a critical aspect of the organization’s success. “He not only knew the impact that safety could have on our organization, but he was passionate about it. He did more than talk about safety, he made people accountable for working safely,” said Ryan.

“Although we have an Environmental Health, Safety and Security staff of 14, we truly believe that we have 2,700 employees with a full-time responsibility for safety and compliance. It is because of our employees’ awareness and dedication to safety that we have been able to be so successful in our efforts,” Ryan said.

Ryan received a $2,500 cash award during the special ceremony, along with a plaque, certificate, and one year’s use of KellerOnline for himself and his coworkers.

Chris Seider, Environmental Health and Safety Manager of Burger Boat Company, was awarded 2nd place at the KellerOnline SPOTY ceremony. He was recognized for helping his organization, a manufacturer of custom motor yachts ranging in size from 100 to 200 feet, overcome staggering incidence rates to be well below the industry averages. Six years ago, the company’s incidence rate peaked out at a staggering 37.7. At the end of 2007 the company had successfully lowered their incidence rate to 7.5, well below the industry average of 12.1.

Becoming a company where safety was a priority did not come easy for the Burger Boat Company as it required a culture-changing focus. He said, “There are reasons some companies succeed at safety, it’s their ability to change the culture that exists. It’s the combination of a positive culture and various tools that make safety work. Our new culture has employees pushing each other, holding one another accountable for unsafe acts and congratulating the safe acts.”

For his efforts, Seider received a $500 cash award, a plaque, certificate, and a one-year subscription to KellerOnline.

Mike Martin, Safety Director for S&S Transport, Inc., was awarded third place. He received a $50 cash award, a plaque, certificate, and a one-year subscription to KellerOnline.